Cobb Tuning released their Flex Fuel Kit for the 08 to 14 WRX and 08 up STI somewhat recently and it has proven to be nothing short of amazing. Not only does it make E85 a lot easier to use, but it has also opened doors into new research within the fuel system itself. So, like most FA20DIT WRX owners, I’ve been sitting here in front of my computer patiently waiting the Cobb release email giving us the green light, 2015+ WRX Flex Fuel Kits: Now Available. That email finally came, our kit arrived, and it has successfully been installed on our 2016 WRX shop car which also happens to be my daily driver.

The mods on this WRX are simple at the time of this blog writing. As it sits right now, it has a GrimmSpeed Catless J-Pipe, an EGR Delete, a GrimmSpeed EBCS, and the Cobb Accessport.

Since E85 is one of the best ways to get more power, that's one of the first things I began to experiment with. It's amazing to be able to pick up so much power with just the right fuel and tuning! However, E85 is not without its pitfalls and downsides.

On a port injected car like the EJ powered WRX and STI, you can upgrade the in tank fuel pump and the injectors and meet the extra demand placed on the fuel system by using ethanol. However, on the FA20DIT powered WRX, you are working with a direct injected fuel system for which there are currently no upgrades available. The great thing about the DI WRX though, is that you don’t necessarily need upgrades to run E85. The DI fuel system is already robust enough in terms of fuel supply to handle the 35% higher demand placed on it with E85. 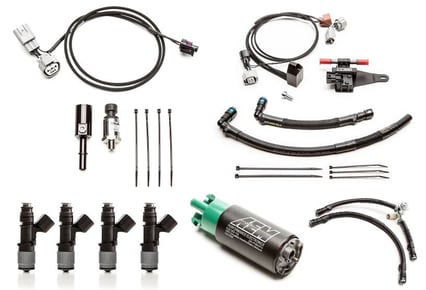 So, what’s the problem then?

The problem is lubrication… The high tolerances found in the high-pressure cam driven fuel pump in the DI WRX (and other DI powered cars) require some lubricity from the fuel that is ran through it to maintain safe reliable operation. There is plenty of lubricity in gasoline, but not so much in E85.

What ends up happening is the HPFP doesn’t get enough lubrication from higher ethanol content fuels and begins to have trouble maintaining the extremely high pressure necessary to operate direct injectors. You get wild oscillation in fuel pressure and in some cases the pump will quit all together and can leave you sitting high and dry.

What we’ve seen from people who have had the problem of failing fuel pressure from the HPFP (including myself) is that after going back to run gasoline again, the pump cleans itself out and returns to normal function.

Is this a big enough problem to justify not running E85? Absolutely not!!

The FA20DIT powered WRX has shown to be just fine running smaller mixtures of Ethanol. E30 is considered safe and even mixes up to E40 will probably never give you an issue. Some people (myself included) have even had success running a couple tanks in a row of full E85 before switching back to gasoline for a couple “cleaning” tanks.

The biggest issue that I have had over the last year of tuning my car on both E85 and 91oct (best available here in Colorado) is the switch in between the two fuels.

To make the switch, I will run my tank as near empty as possible (this never happens at a convenient time). Then I’ll go fill up with whatever fuel I’m switching to (between 91 and full E85). After the tank is full, I can’t switch my map over straight away, I must sit there and either idle for a long time, or drive for a few miles before the new fuel makes its way through the lines and up to the engine.

I know it has made it there based on the fuel trims as they will either go very negative, or very positive (depending on which fuel I’m switching to/from). Once I see the fuel trims going crazy, I do a real-time flash to the appropriate map.

That doesn’t sound too difficult, but unfortunately, the fun doesn’t stop there. Even if I run the tank as empty as possible, it never fails that there is still some residuals of the opposite fuel left in there.

Because of this, after the switch, if I’m switching from E85, the car will run too lean on my 91oct map.  If I’m switching from 91oct, the car will run too rich on my E85 map. Because I tune it myself, this isn’t too big of a problem for me as I’ll just make a quick little adjustment in the tune and be on my way. However, if you are not able to tune yourself, this will always be a problem.

This is where flex fuel comes in. I spent some time building my flex fuel map based off my E85 tune and my 91oct tune. After it was done, I loaded up the map and installed the kit. The kit was a breeze to install!

When I fired it up, I found the ethanol gauge in the monitor menu and pulled it up to find that I had 14.1% ethanol in the tank. This was not really a surprise as the tank before that I was at a 50/50 mix and the tank before that, I was on full E85.

So, the first thing I did to test out the sensor was to go to the nearest E85 station and put in a gallon of E85 (my tank was at about ¼ at this time). After putting in a gallon, I headed back to the shop and took note that it was about 2 miles worth of driving (relatively aggressive) before the ethanol content started to change, and another 1.5 miles before it stopped increasing and settled in at 23%.  To my delight, the fuel trims didn’t change at all, even though there was nearly 10% more ethanol than before. Since the 23% Ethanol content was not a problem and the car ran fine, this meant it was time for some tuning.

Since I had already spent some time street tuning my car with the newly fitted j-ipe on full E85, I had at least half the tune mostly worked out already. My 91oct map needed some work when I combined it with the E85 map using Cobb’s new custom features to go along with their flex fuel kit.

So after working the mix back down to full 91oct with a 10.2% ethanol content, I did some street tuning, then booked the dyno time.

We made sure to only have about a quarter of a tank worth of 91 in the car at the start of the dyno to ensure a good mix of ethanol with the 6 gallons we brought along with us. The car, being my daily driver is tuned relatively conservative and made a healthy 256whp and 298wtq on 91 octane.

After making sure the 91 map was good, we dumped in 6 gallons of what ended up being about E70, and the ethanol content sensor reported after driving on the dyno that I was at a 45% mix. This was right about where I wanted to be, and after some minor changes including raising boost by only 1.0-1.5 psi, we came up with 297whp and 343wtq.  Switching fuel without having to worry about tuning and pick up 43whp and 45wtq?  I'd say that's money well spent!

While there is definitely more to be had, I am quite happy with the gains over all. With the Cobb Tuning Flex Fuel kit dialed in, I can now easily switch between 91oct and E85 fuels without having to go back to the board and retune because the car will now run efficiently on both. Here is the difference between the 91 octane map and the changes made once the ethanol sensor starts reading a large amount of ethanold in the fuel system.  Impressive!!