A top mount intercooler may not be for everyone, but it might be just what you need. Check out these four reasons why it might work for you and if they resonate with you, then maybe this will help make the decision a bit easier.

Pretty much anything is better than stock

The OEM intercooler on the STI is better than the one on the WRX, however, it still has plenty of room for improvement. The factory intercoolers are thin and have lower fin density, and this all translates into a lack of performance. They are quick to heat soak, and they are barely capable of prolonged performance, even at stock boost levels. Once you start to turn up the boost with tuning and other performance parts, the OEM TMIC quickly becomes a bottleneck. The good aftermarket companies use high quality bar and plate cores that are a vast improvement over the factory tube and fin design, and since a TMIC is smaller, you get much better core for the money. 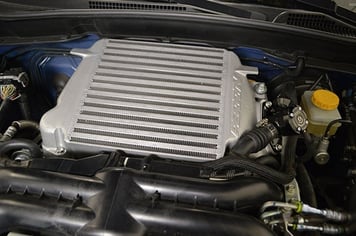 Every build starts with a budget or at least some sort of reasonable limit for each person. Some budgets are smaller than others. So, if your build goal isn’t monster power and a full-fledged track car, then you probably don’t need to spend the extra money on a good FMIC when a TMIC will suite you better. There are many TMIC’s on the market that are more than capable of supporting larger amounts of power. If your goal is a fast street car/daily driver, a TMIC may be the better option for you. Even if you plan on building a dragster out of your WRX or STI, a top mount intercooler is still not a bad option. You can cool it back down after every pass so heat soak can be held at bay. So unless you plan on spending a lot of time in boost, you may be better off going with the less expensive TMIC vs a FMIC that may be overkill for you.

We’ve already established that the intercooler is a necessary upgrade on the WRX and STI. One of the reasons the TMIC is preferred is because it offers a huge bump in performance without taking away any of the response. With larger high flow intercoolers, you will always find a little more pressure drop. The TMIC avoids a lot of this pressure drop and allows you to maintain throttle response as close to stock as possible. This is also exemplified by the fact that you have a much shorter route from the turbo to the throttle body with a top mount intercooler than with a front mount intercooler. Another performance benefit to a TMIC is that the WRX or STI is already optimized for it. With the big hood scoop and the ducting, air is forced to go through the intercooler instead of around it. Despite its tendency to heat soak faster than a front mount, the top mounts are often very efficient with the proper ducting because more air is forced through them, whereas on a front mount, unless you have a properly ducted front bumper area, a lot of the air can spill around the intercooler and isn't actually used for cooling. 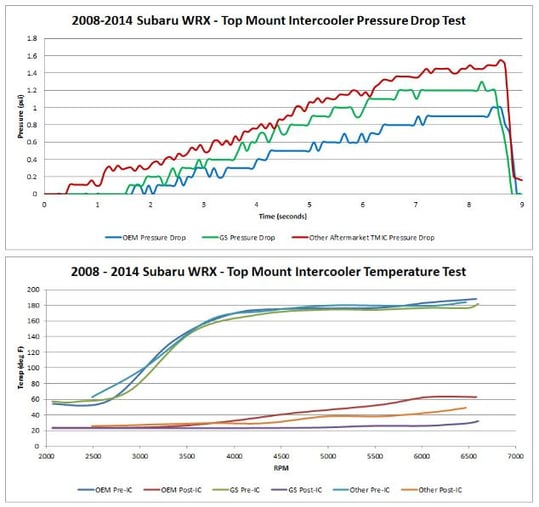 It is probably common sense, but the upgraded top mount intercoolers are far more easy to install than a front mount. So, if you don’t have a lot of tools, or if you don’t have a lot of time, a TMIC is going to be an excellent choice for you. Many of the upgraded TMIC’s on the market come with new ducting to make the most use of the larger than stock core and the factory air scoop. It is these TMIC’s that will perform best on your WRX/STI. The other benefit, and I believe this is a huge benefit, is the lack of joints and couplers which makes for potential boost leaks. And speaking of boost leaks, if you have one, there is a whole lot less area to check before you find it.

A front mount, in a Subaru especially, requires switching to more piping.  The sacrifice of a harder install and more complexity can be worth it, but for some people it's not.  If you're a seasoned modifier, the complexity might not scare you.  But if you're someone who wants to set it and forget it, it might not be for you. Occasionally, these kits will force you to make sure everything is working properly which takes more time and work.