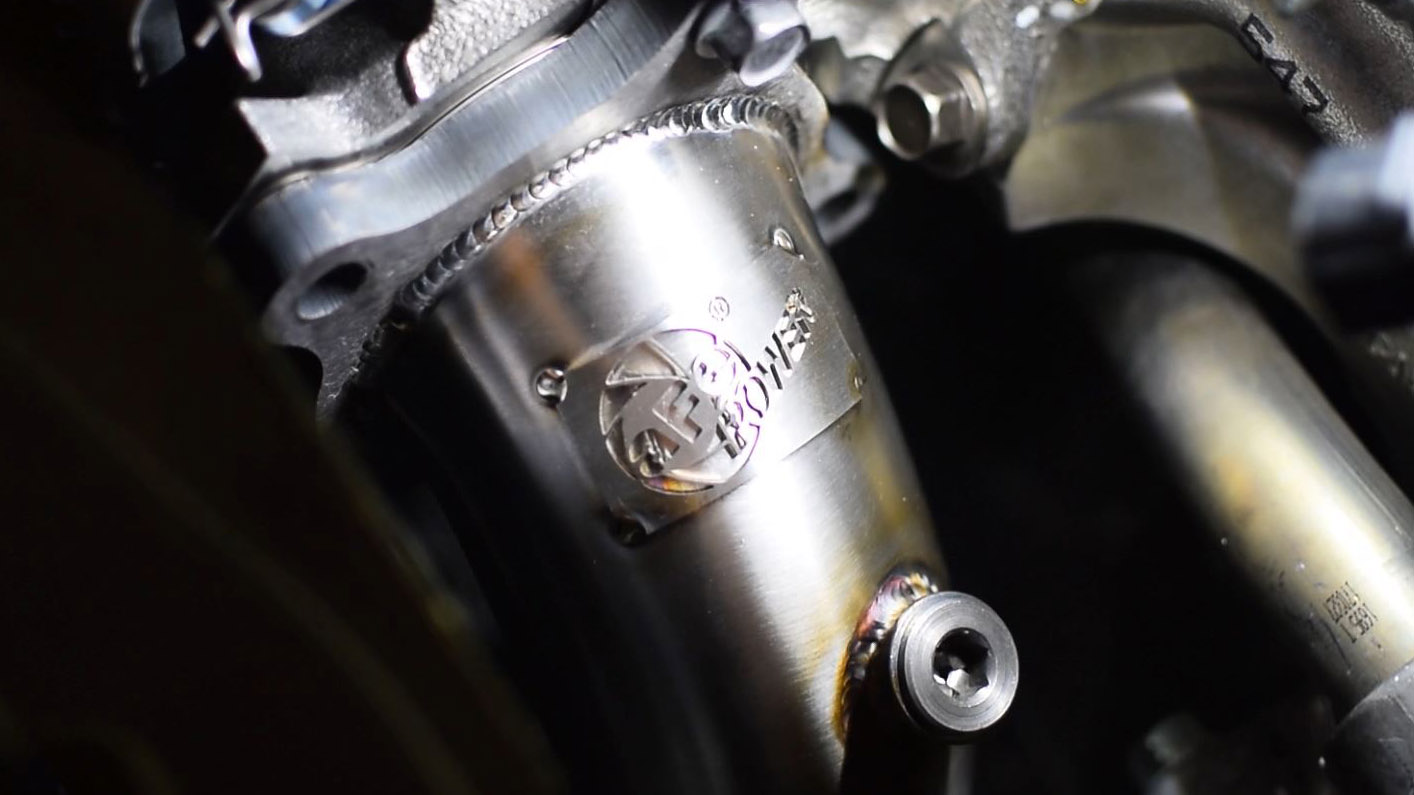 With our newfound power courtesy of the aFe Power exhaust system, we were very excited to finish the exhaust part of the project with the downpipe and the midpipe. We knew this would really let the turbo breathe much more than the stock system and give us a great sound, as well. All of our wishes came true.

After gaining 5 hp and about 7 ft lbs of torque at each's peak after bolting on the catback exhaust, we were pretty curious about what the downpipe and mid pipe would do. On the 10th gen Civic, there is a separate midpipe that, when modifying, can't really be combined with the downpipe like some platforms would allow with this configuration, mainly due to the subframe and engine bay space constraints. All aftermarket exhaust sections replace the respective pieces without changing the configuration. With that said, it gave us an opportunity to install and test both the downpipe and midpipe individually.

The midpipe took it's turn first since it's the easier install and the closest to what has already been modified. aFe Power's midpipe measured in at 2.5 inches outside diameter compared to the 2.1 inch stock size making it roughly 20% larger. It's a relatively easy install that only takes basic tools and the ability to get underneath the car. It is a bit tricky trying to snake the pipe out through the front of the subframe but a slight bending of the flexible heat shield going through the exhaust tunnel helps it break free. 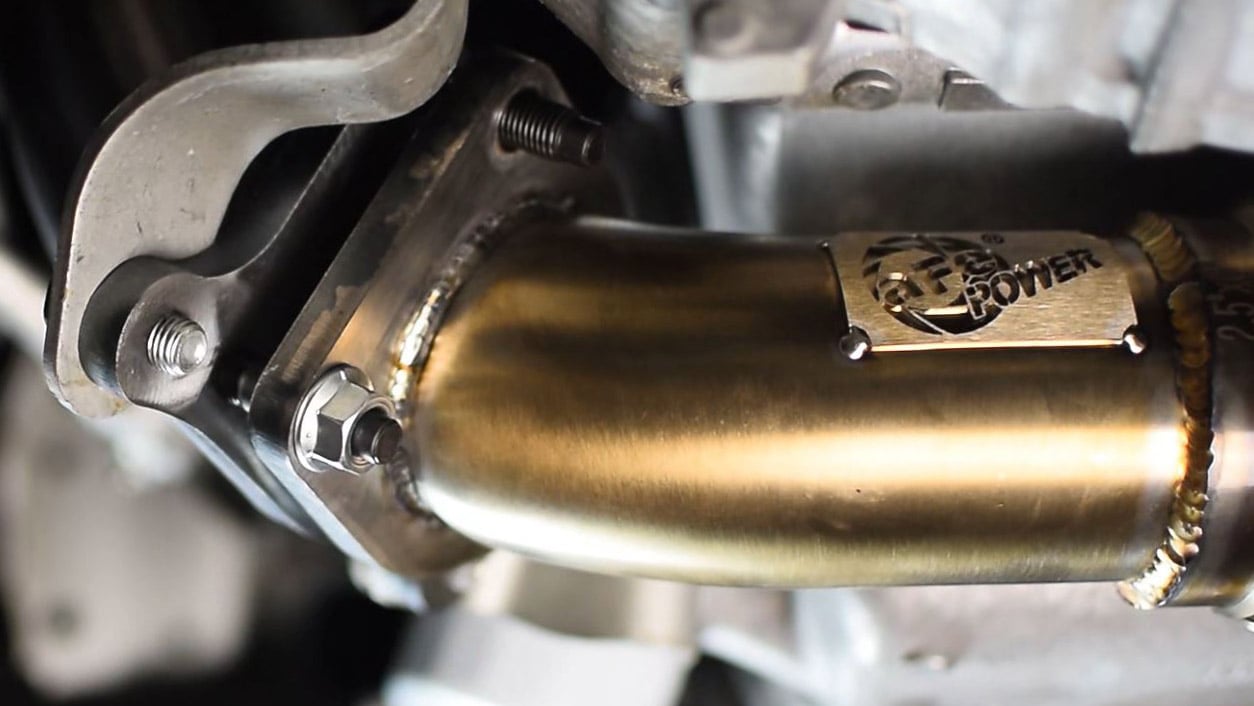 After installation, we put it on the dyno to see what it made compared to the last dyno performed with the exhaust only. No tuning was done or was needed in order for the engine to respond positively. Here is the dyno graph showing the difference.

The only major signs of change are in the spoolup region where the turbo comes on slightly sooner and more horsepower and torque are made. Peak torque rises about 5 ft lbs and horsepower gains are slightly better in the same area. At the end of the curve, you'll see a big change but this is due to the car not pulling ignition timing like it was doing on our last dyno when we were seeing high intake temperatures on the dyno. This small section around 6,000 rpm is not an accurate comparison. 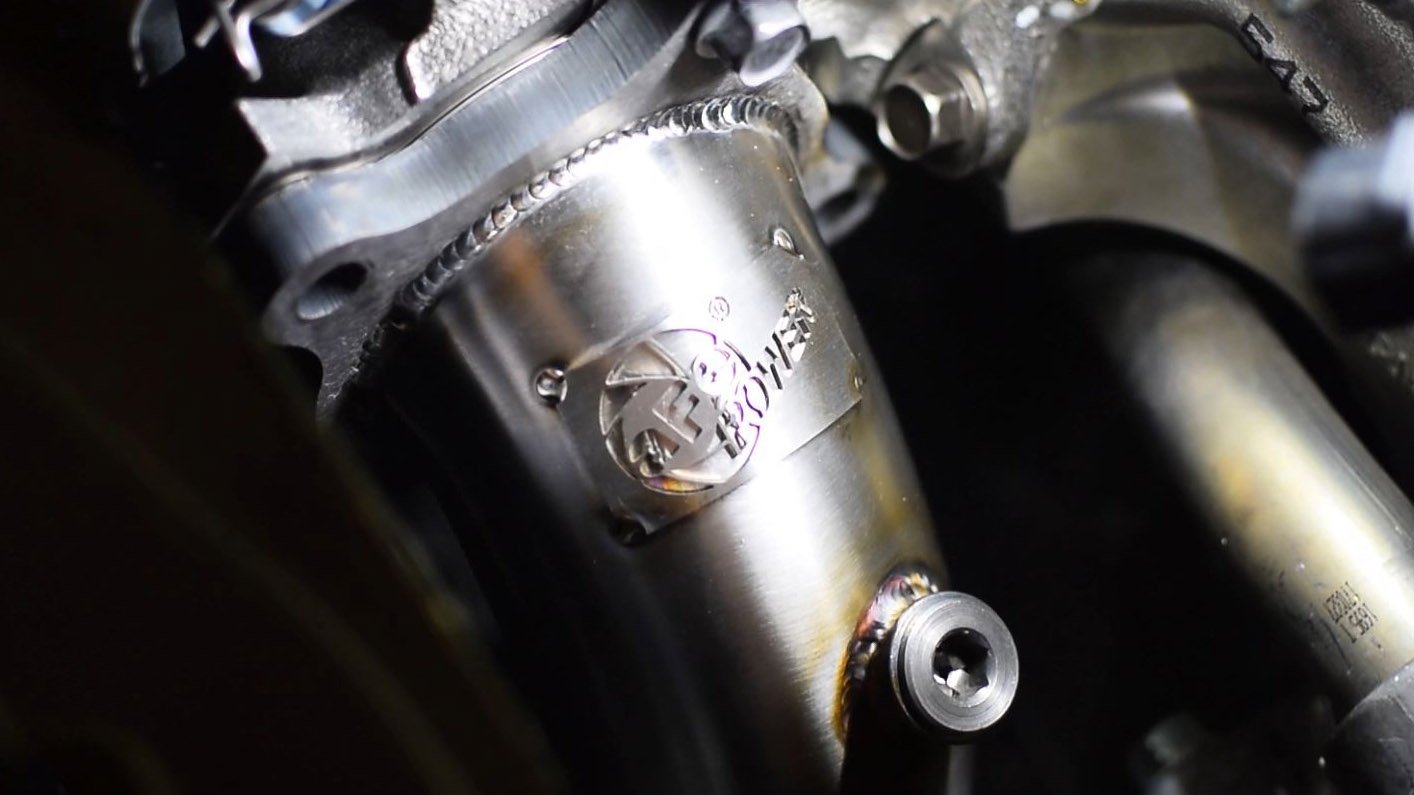 Let's move to the downpipe results.

The downpipe is a slightly harder install and one that requires a little more time and patience. It's not the hardest downpipe I've ever installed but it did come with some setbacks. There are 2 studs and 2 bolts holding it to the turbo. Both of our studs snapped.... SAD FACE EMOJI. So we had to take the turbo out. In the effort of saving time and making stupid, costly excuses like having a spare turbo, we simply put a new Honda OEM turbo in and called it a day. We didn't want to take the time to drill out the studs and retap the turbo. Frustrating, but whatever. It happens. We have a spare turbo now if we need. After that circus act, the downpipe went on very easy and was a quick process to button up.

The downpipe dyno results really put a smile on our faces. Here they are. They speak for themselves. The entire curve rose once again, just like it did with the exhaust system. Torque comes on sooner and harder, signaling that the turbo is much less restricted overall and the engine can breathe a little easier. This is all with no extra tuning.

The aFe downpipe, along with the midpipe and the exhaust for the 10th gen Civic all bolt up VERY nicely. There were no fitment issues whatsoever. The quality is pretty good in my opinion. The wall thickness is good, the flanges are strong and thick, and the welds appear to be plenty sufficient for long term durability. The finish is really nice too as everything is brushed. Overall, our turboback setup from aFe Power netted us some great gains.

Here's the comparison of the stock exhaust with tuning to the turboback without any modifications to the tune throughout each installation. It's a substantial increase that would inspire dang near anyone to get a full turboback setup on their own 10th gen Civic 1.5T.