Our 10th Gen Honda Civic Si has been a riot so far and with the addition of a new intake system from AEM, we're excited to keep squeezing out every ounce of power that we can from the stock turbo. A turbo requires a lot of flow to work efficiently and, in theory, removing the factory paper filter and airbox should give us noticeable increases in power and torque. How much is something we had to find out for ourselves on our dyno.

AEM makes a few different intake systems for the 10th Gen Civic 1.5T engines. The non-Si version was gifted with a true cold air intake where the filter is relocated to a place further down and away from the top of the hot engine bay. The Si models only get the short version. AEM still calls this a "cold air intake" though, and my assumption is because it comes with a pretty nice heat shield. I was actually surprised by how well it fit in place of the old airbox and how well it guards the filter from heat. Both the Si and non-Si models can use the OE replacement filter. We did some testing on the replacement filter just to see if it's any better than the paper filter and we did actually find some extra power. Even if you don't care about the extra power, it's still a great part to have because when it comes time to get a new filter, all you need to do is clean it and put it back in. No need to buy a new filter. It's not an oiled filter so you don't need to get all messy when you install and keep reinstalling it. Just let it fully dry out and you're good.

Since our car is a Si model, we went with the short version made for our car. My understanding is that Honda actually used different MAF housing sizes between the base and Si models so it actually does matter what intake you get. The MAF housing is directly correlated to the ECU's ability to read how much air is coming in so it's very important that it's exactly right.

Replacing the filter only requires you to loosen the 4 bolts holding the top of the factory airbox to the bottom and swapping the filter. Tighten the bolts back up and you're ready to go. 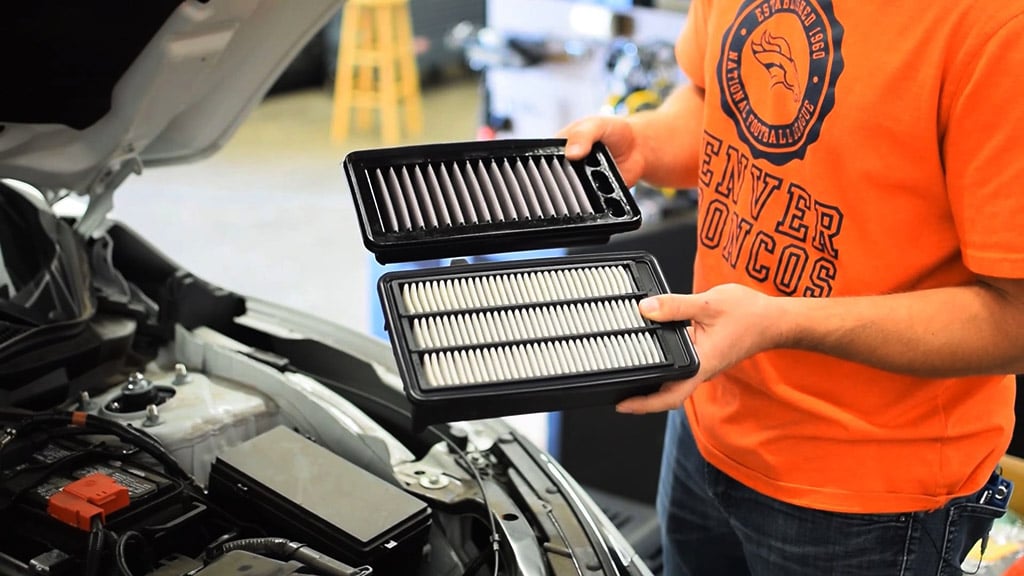 Here's the difference we see on the dyno with the different air filter. It did actually pick up some gains in the spoolup region. This is a small difference and might be barely noticeable to the driver. But either way, it tells us it is a slightly better flowing filter, something we're pleased to be able to see for ourselves.

Onto the full intake replacement.

In case you're wondering, the plastic piece of the intake is a very complex piece that houses the recirculation pathway for the bypass valve and it features a really tight bend that takes is 180 degrees into the turbo. It's custom made to work with the functionality of the compressor housing on the turbo. I've seen some companies out there developing a replacement for this piece since it has the potential to be upgraded, but any standard intake replacement is going to feature everything before this piece of the intake system.

The AEM intake system for the 10th gen Civic Si is as simple as an install gets. A few basic tools and few minutes of your time and you're off the the races.

I'll provide a few observations of my own about this kit. The filter area is larger than stock, of course. Naturally, that would indicate less pressure drop in the intake and better flow right there. It's a conical filter leading directly into a smooth flowing tube. All good there. The heat shield is not something AEM typically includes with some of their kits but I'm very glad they did here. It's a really nice shield that is custom CNC cut and bent in order to fit where the old box did. The mounting holes and entire shield lined up perfectly. Keeping heat away from the filter is super important and we're glad they addressed it. Hotter air doesn't have as much density of oxygen molecules. The turbo is physically grabbing those molecules and forcing them into the intake system. The denser the molecules, the more it can grab from, simple as that. So keeping it cooler is better. 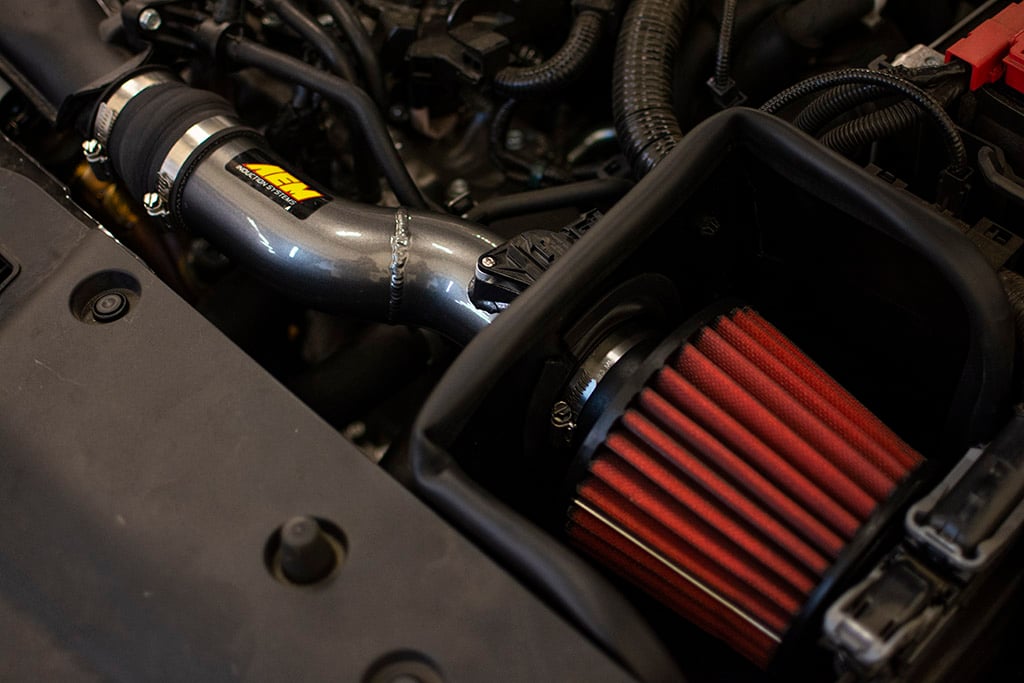 We're pleased to report that this intake helped us pick up around 10-15 horsepower and torque for a large chunk of the area around 5,000 rpm. Power and torque increased pretty much from the top of the torque curve which happens at about 3,100 rpm, all the way to the end. This is exactly what we were hoping for.

There are a lot of intakes out there and many of them probably have the ability to provide more power and torque, but we're glad we were able to collect some data from this one and put this thing out on the pavement knowing it makes more power.